According to an article from the Seattle Daily Journal of Commerce, Seattle is the 7th most costly place to build worldwide. Because Bainbridge Island directly competes with Seattle for labor resources and materials, our region is facing unprecedented escalation and historic market conditions stemming from a construction boom. This boom, coupled with tariffs, tax increases and additional code compliance requirements, has caused BISD construction expenses to outpace the funds available from the 2016 Bond.

On May 31, 2018, the board directed the superintendent to establish a committee for the purpose of identifying funding options to complete the 2016 Bond projects. A deadline of early fall was established for a final committee report and recommendation.

Superintendent Peter Bang-Knudsen formed the Superintendent’s Advisory Workshop (SAW) to review and address funding alternatives. The committee was comprised of board members, staff, administrators, union and community members. The SAW committee met on three occasions and at its final meeting, unanimously agreed that the best option for completing capital projects and providing essential renovation money through 2025, is a six-year $15 million levy. Based on an average assessed value of $660,520 the impact per household is approximately $198 per year (.30/$1000). [UPDATED AMOUNT AS OF 10/24/18.]

A: BISD is experiencing a budget shortfall for its construction projects due to a combination of reason such as:

The $15 million levy will allow BISD to finish its building commitments made in the 2016 bond and also provide funding for district-wide security upgrades and essential renovations through 2025.

2. What amount did voters approve in the 2016 bond measure?

A: In 2016, voters approved an $81.2 million bond measure that included $39 million towards replacing Blakely Elementary, $30 million towards replacing the Bainbridge High School 100 Building and $12.2 million towards district-wide repairs and essential renovations. At the time of the 2016 election, the district knew the construction projects were estimated to cost more than the amount that voters approved, but in order to keep the tax rate stable, the district identified $10.5 million in anticipated funds that would go towards the bond projects.

3. How were the costs estimated at the time of the election?

A: The district worked with a professional cost estimating firm, The Robinson Company, who considers many factors when projecting costs such as escalation (fuel, energy, supplies) current market conditions which includes materials, supplies and labor availability (which are difficult to predict far in advance), district construction standards, site conditions and recent and projected bond passage or requests.

4. I have heard that the construction boom currently happening in the Seattle-metropolitan area has affected the price for construction on Bainbridge. Can you explain this?

A: Competition for materials and skilled laborers continue to significantly impact construction costs. Overall market costs in the Seattle area are currently outpacing national trends. Articles in the Seattle Daily Journal of Commerce reported “disappointing” school bid results, with sub-contractor availability particularly challenging. The article continued to say, “General contractors and cost estimating firms continue to be surprised by the rate of cost increase in the past few months.”

Additionally, an article (May 29, 2018) in the Seattle Daily Journal of Commerce cited a new survey from Turner & Townsend which ranks Seattle as the seventh most expensive place to build in the world. This directly correlates to rising expenses for BISD, as the materials and skilled laborers needed for BISD projects come from the Seattle market.

The Seattle Times, on January 15, 2019 published this article titled Seattle still has the most cranes in America, and construction isn’t losing much steam, which states “[t]here’s nothing to suggest the construction craze is about to die down.”

5. Along with unprecedented escalation and market conditions, are there other factors that attribute to the shortfall?

A: Yes. Additional factors include:

Our current cost estimates project a $10.2 million shortfall, which will be covered by the $15 million levy. In addition, the levy provides funding for district-wide security upgrades and essential renovations through 2025.

6. Why doesn’t the district put the projects on hold and wait for the construction industry to slow down?

A:  This would only provide a temporary solution and it comes with a cost.

7. Why doesn’t the district scale-back the construction projects?

A: Throughout the entire design process the team has focused on opportunities for value engineering (cost reductions).

The district elected early in the Blakely replacement project to gain approval from the state to use an alternative construction delivery method called general contractor/construction management (GC/CM). This method allows the contractor to work alongside the district and architect to use cost-effective designs, materials and minimize site costs.

The district is committed to building 50+ year schools that have a high degree of energy efficiency and ease of maintenance. The district’s buildings are designed to meet 21st Century Learning environments while maximizing flexibility. As educational programs evolve, our buildings need to support change and provide the ability to address changes to the island’s population in the future.

8. If this is a regional issue, how are other school districts handling the escalating expenses?

9. What are the tax implications of the proposed levy?

10. How will this additional levy impact our local school tax rate? 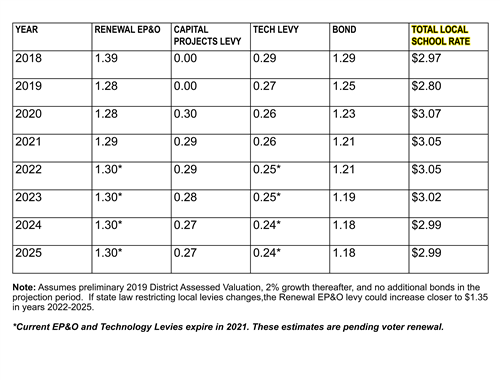 11. How do Bainbridge Island School District’s local tax rates compare to other districts in our region? 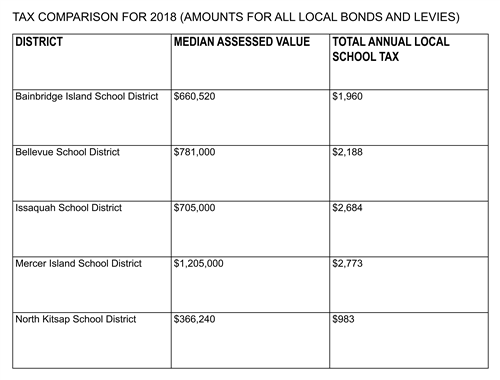 12. Did you gauge the public’s opinion on this proposed levy? What did you learn?

A: Yes. We used the services of CFM Communications who are experts in creating and executing surveys and are used by many school districts in our region. CFM Communications implemented telephone and online surveys to Bainbridge Island residents.

The results of the surveys found strong, widespread support for a $15 million levy. Nearly seven out of ten favored the levy — well above the 50% threshold need to approve the measure.

13. What is the current status of the construction projects?

A: Ground broke for the new Blakely Elementary school last fall and the new building is scheduled to open in the fall of 2019. At the October 25, 2018 School Board Meeting, the board approved the schematic design for the replacement of the 100 Building. The goal is to open the new 100 Building in December 2020

A: Yes. The design for the BHS 100 Building involves moving the commons space from its current location at the lower end of the BHS 200 Building, to the new 100 Building. This change situates the commons at the “heart” of the BHS Campus and allows the space to be utilized throughout the day and also provides better administrative supervision of the space. The current commons will be renovated into an auditorium with seating for 350-400 people. The space offers an ideal environment for transformation, as the original design intent provides visual access and supports all elements of performance activities.

15. How will these levy funds help with renovations and repairs?

Just like when homeowners experience unexpected problems such as leaky roofs or broken furnaces, BISD facilities will need repair and renovations as systems break or become outdated. BISD’s Capital Projects works hard prioritizing projects across our seven schools and our district support facilities (District Office, Transportation, Maintenance). To get an idea on how funds have been spent from past bonds, click the following: 2006 Bond, 2009 Bond, 2016 Bond.

16. How will this levy improve school security?

School safety is a district priority.

In 2016, Consultants completed a security needs-assessment of our campuses, and BISD continues to work through their recommendations to improve security district-wide.

The 2019 levy provides additional funding for BISD to continue working through the recommended security measures such as:

Over the past three years, BISD has spent more than $330,000 on security upgrades such as:

17. What impact will the construction project have on BHS students?

It’s definitely a challenge figuring out where to house the classrooms once the old 100 Building is torn down and the new one is erected. Fortunatley, it’s a challenge we have conqured!

Classes will be offered as usual, but will be in different locations such as Commodore, in the portables located between Commodore and BHS, and using the culinary facilities at Bainbridge Artisan Resource Network (BARN) for Consumer & Food Sciences.

Once the commons becomes unusable as a cafeteria, BHS students will access Food Services in the 500 building.

Do you have a question we can answer for you? Please email BIPSS Co-Chairs Ian Forbes and Jason Shutt (ianforbes@comcast.net and jason@jasonshutt.com).